MINISTRY OF THE TARES 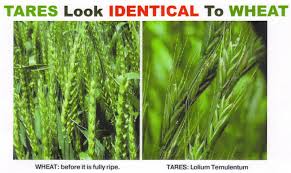 MINISTRY OF THE TARES

The five false voices in the congregation:

All of the false voices are connected to those hearing seducing spirits who are working against the saints to draw them away from God. These men/women are usually still operating with their wounds and have not had inner healing. They also have major sin in their life, such as: a faulty foundation. They are not established in the LORD because their foundation is in Babylon. Often, they are of Baal. They suffer from wrong motives, and often do all the right things for all the wrong reasons. They are in pride, looking for a platform in which to become famous among people. Since their foundation is in Babylon, they too desire to build a tower to reach God, but not to be with the glorious King of the Universe, but to make a name for themselves among the people. (See Genesis chapter eleven.)

We have the false prophet, who tells leadership what they want to hear.

We have the diviners who provide answers that are derived from a source other than that of the LORD for things like a false peace that is gained thru “yoga” for instance. They look for helping others in things like acupuncture for healing. These practices cannot be “Christianized”.

There are the dreamers who are intoxicated by “spirits” and have dreams that they claim to be from God and are not, but they give direction to leadership and also to the people.

As for the enchanters, they bring forth false teachings that lead people away from the truth of God’s Word. The teachings are closely related to truth because there are some truths mingled into them.

The sorcerers among us are those who virtually conjure up spirits. There is a ministry leader who laid on the grave of a famous healer until he received the man’s spirit…this is sorcery!!! Another musician, (who calls himself a worship leader and sells extraordinary amounts of CD’s per year), also laid on a grave to receive the man’s anointing…sorcerer!!!

In verse 14 of II Chronicles 36 noted above, we see that the chief of the priests and the people polluted the hallowed house of the LORD. This is when they Christianize forms of worship to evil gods such as Karate, (and all of the martial arts), yoga, pilates and other forms of discipline offered to evil gods, and acupuncture which is a personal physical offering to an evil god! Also lumped in the mix are things like, co-habitation with members of the opposite sex, and fornication, (which is oral or anal sex). (I know, “everybody does it”, so it must be OK. But it is NOT OK, these are evil practices in the eyes of the LORD.)

Verses 15 and 16 show us that the LORD in His mercy and love for His people sent messengers, (like me in this hour), to warn the people of their disobedience and they mocked them and misused them inciting the wrath of God until THERE WAS NO REMEDY…

The false voices among the people which had audience with leadership, the rebellion of leadership to heed the true prophets, and the stiff-necked leaders who refused to go into bondage as was spoken of by Jeremiah, and the pollution of the temple…no remedy for these issues.

If we want to operate in truth, we must admit that the voices in the current congregational climate are of the false variety for the most part, and God’s people seem to scarf all of it down without batting a lash. Baal prophets spew their doctrines of demons over the television airwaves and they go unchallenged by mainstream recognized leadership. But they too live like rock stars and it seems to be about the hour where the tables of the money changers are to be turned over…

So, where is the good news? The great thing about serving such a perfect God is that He has a plan of restoration in place long before He ever brings His own people into bondage. So in II Chronicles 36 we know that after the land fulfilled a Sabbath rest of 70 years, a King came into power.

Just as the LORD gave great favor to Esther not only with the King but also with the eunuch over the harem, Hagai, in order to prevent the total destruction of the Jews; He also made a way for the Jews to return to Israel after they were taken into captivity. Let’s read about it:

King Cyrus is the son of Esther the Queen of Persia! It is written in some ancient records and also can be deciphered by counting the years and equating them to the time of her reign. This was a great sign and wonder for me! To find out that King Cyrus was ½ Jewish and was a man of God just filled my heart with gratitude to the LORD for how great He is and how magnificent are His plans!

By putting Esther in place as queen, giving her and King Ahasuerus a son who would grow up to know Him and to rule Babylon, He ensured the restoration of Israel even before it all happened!

We must believe that even though we are in the end of days we will see the miraculous and merciful God of our fathers bring us out of our bondage too! We must hold fast to our faith as the coming events unfold…BE ENCOURAGED!

SO TO SUM ALL THESE THINGS UP:

I DO WHAT I DO BECAUSE WE ARE WITNESSING THE GREAT FALLING AWAY AND I SEE IT. I KNOW THAT THE LORD DESIRES THAT ALL SHOULD BE SAVED AND NONE PERISH SO I TEACH HOW TO DISCERN THE REAL FROM THE FALSE…